So I’ve read alot of blogs out there for getting ready for containers, but since I’ve hated anything dealing with fruit and tech for so long, I’ve disregarded a whole side of scripting. This is something I’m remediating in further blogs, but for this one, lets focus on Windows 2016 non-desktop experience containers…. And throw in some vRA because its fun…

So first you need to get your hands on a Windows 2016 iso. From my research the nonn-desktop experience is built-in to the basic ISO(HUZZAH).

Go through the normal Setup for your environment to setup a new machine in vSphere or whatever IAAS your using.

Once you can Console in you’ll be greeted with a familiar friend:

So set a password thats totes legit, and get to work. Once your in the cmd prompt its time to whip up an old friend:

YUP, Sconfig will setup everything from here on out in terms of firewall, domain, ip, etc. For this purpose I’ll just set the ip on the machine.

This will ask for confirmation so hit the ‘Y’.

This will finish up the docker install and you will probably want to reboot the machine.

GREAT Docker is now installed and your ready to go! not really…

For people like me, you want to get Docker within a centralized management(VRA would be nice). So for this you need to continue some setup.

First you would create the docker config file otherwise known as “daemon.json”.

Where role = the role of the public key. Once created open the key (the command should show you where) in “notepad” and copy from “—-” to “—–“. Now login to vRA.

Create a name for the creds(this will be used later) and paste the public Key that you copied from creation in the text field. 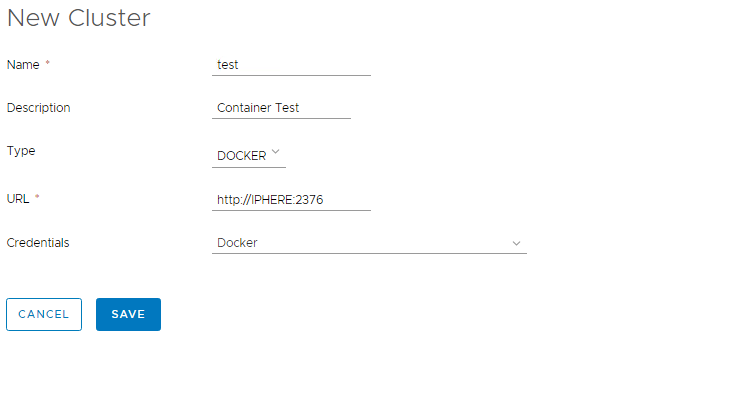 This should create your Docker Container Master.

Installing a core OS can be difficult for those that don’t remember those days(i had to google myself). Installing VMtools can be difficult… Mount the Tools on the OS and run the following on the disk drive:
.\setup64.exe /s /v "/qn reboot-r"

View all posts by Nate